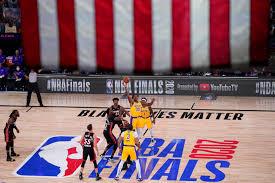 The 2020 NBA Finals are underway and it is like no other we have seen before. This year’s Finals is a battle between the Los Angeles Lakers and the Miami Heat. Many feel as if the Heat will not have a solid chance to win the Finals with such a young and inexperienced team. While the Lakers have many veterans with much experience, the struggle of defeating them in the series to become world champions is a tall task for the Heat.

With the Lakers already taking a 3-1 lead in this series, what will the Heat need to do in order to clinch another win over the heavily stacked Los Angeles Lakers?

Deveyon Sturdivant, a sophomore on Wingate’s campus, feels as if the Lakers are going to win the finals with no question.

“The Lakers just have too much fire power in LeBron James and Anthony Davis. Those two are a lot to guard alone, and I feel like the Heat do not have what it takes to stop them,” Sturdivant said. “[In regard to the Heat] I feel like everyone has to step up and play their role to the fullest if they want to make this series more interesting”.

Avern Montaque, who is also a sophomore at Wingate University, believes the Lakers will win it all, as well.

“They have way more experience and depth, I feel like that will ultimately win them the title,” said Montaque. “[When talking about the Miami Heat,] if they want to win, Jimmy Butler will need to step up every game. The starters around him will have to perform at a high level every game, as well.”

It’s no secret that the Miami Heat are the underdogs this year. It’s evident to the majority of the people watching the series this year that everybody will have to come to play in order to defeat LeBron James and the Los Angeles Lakers.