One night, I walked into my brother’s jazz combo rehearsal and saw an unfamiliar face; Arte immediately introduced him to me. “Andrew, I want you to meet our new guitarist, Aderson; he’s a student/teacher here.” said Arte, as I shook hands with Aderson da Silva. Who knew that this man would later become more than just a musician, student, and teacher at Wingate University. 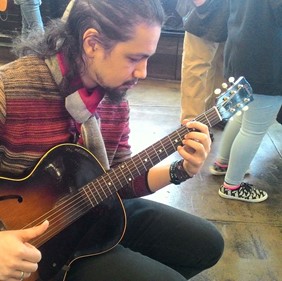 As an international student that taught English in his native country, he couldn’t say no to the opportunity. “I’ve been teaching English for the past 10 years;” said Aderson, in regard to his decision to study abroad. “And to have the opportunity to come to a country I have been studying and teaching my whole life, and teach my own culture and language here, I felt that it was the golden opportunity to put different things I’m passionate about together.”

Though teaching was not his ideal career in the beginning for Aderson. “I started to teach as early as 17, and my mom is a professor, so I grew up with that,” said Aderson, “It started up on accident; I did not expect that I would teach. But when the circumstances lead into something— needed, let’s say the money— and I had the fluency of the language and they invited me to teach. And slowly, I began to realize that it was something that I really wanted to do.”

His musical experience, however, was strongly influenced by his father. “Let me add that my father is a musician. He and his brother had a musical group when they were younger; so they would perform all the time and I would have to say that was my top influence,” said Aderson.

“In my teenage years, I began listening to all sorts of genres of music and getting interested in different stuff. And before I knew it, I was interested in at first singing and then I decided to buy myself a guitar and learn how to play it. And slowly but surely one thing led to another and I was doing it.” Aderson’s guitar is a custom made acoustic from a company in Brazil.

As his vista comes to an end this semester, Aderson wants to be remembered by Wingate University as a man who was involved. “I want to be remembered as a person who is here and making the most of experience,” said Aderson. “A person who did his best to do what he was here to do. You know, the FLTA program tell us that we are cultural ambassadors; so if I could throughout this year show people around me a little bit of Brazil and a little bit our language, our culture, and what my country is then my goal would have been achieved.”

And his goal was achieved based off the people he interacted with at Wingate University. “Aderson has been such a great addition to this campus.” Said Dr. Little-Sweat, in regard to Aderson’s presence on campus. “I have many children around here, but I’ve never had a Brazilian son before; and that’s Aderson.”

Another one of Aderson’s close friends, Arte Elliott, was also touched by his presence on campus. “From the first time I met Aderson, I knew he was a person that was a great man and one who would benefit Wingate University.” Said Arte. “I’m so blessed to call him my friend.”

“I am certain that I am going home with a considerable number of very good friends that I made here; and I’m really thankful for that, but that’s just a bonus.” Said Aderson “Anything beyond what I said before just adds up to it”

After Aderson leaves the states, he plans to return to Brazil for two years according to his program. “After those two years, I’m going to apply for either a doctorate or masters; I’m not sure. But when I come back, I’m going to teach private classes and use some of that time to my musical work because it’s something that also helps me make a living, ” said Aderson.