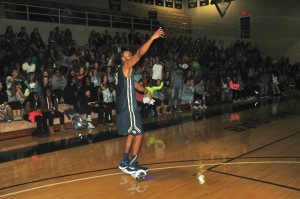 Cuddy Arena – Basketball season only comes once a year, but when it happens it comes at full force. 30 Games packed into one season, playing in different arenas across the eastern region, getting a bid to the big tournament: It all begins at Midnight Madness.

Midnight Madness is a kickoff held at midnight on the eve of the official day that both men’s and women’s basketball teams around the nation are allowed to legally practice for the first time of the year under NCAA regulation. On the east coast, Midnight Madness is not only a celebration of the first practice, but it is also a tradition.

“Midnight Madness is an opportunity for the school to come out and meet us. It gets us pumped for the season. It’s just a fun atmosphere to be in.” said Zeriq Lolar, a sophomore forward from Orlando, Florida.

This tradition has been around for many years here at Wingate University, and it is becoming more exciting every year. “My favorite thing about Midnight Madness is the player entrance’s. Players actually take the time to think of creative ways to come out when their names are called,” said Isiah Cureton, a junior forward from Waxhaw, North Carolina.

Whether it is the cheer and dance team performing a sneak peak of their Nationals routine, the creative player entrances, or catching free Wingate gear, Midnight Madness is a night for the Wingate basketball teams to enjoy themselves and also get the students and faculty excited for their upcoming season.

“It doesn’t just mark the beginning of basketball season for the players, but it also marks a new season for cheerleading. It’s the first time we perform in front of the students, it’s a transition from cheering for football to basketball, and we get to see the new teams that we will be cheering for,” said Cassie Barringer, a senior cheerleader from Laurinburg, North Carolina.