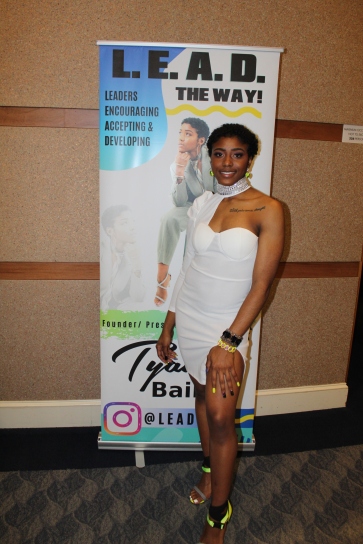 On Saturday, February 15, one of Wingate University’s organizations, LEAD, held its first fashion show. Held in the Batte Center, guests were greeted with the warm welcoming of live jazz music, courtesy of GarageBand.

In order to attend the event, students had to go online and make a donation as little as $1. The donation served as the way students were able to receive their tickets. The proceeds from the ticket sales went to the Men & Women In The Making mentorship program for resources for Union County Public School students.

The atmosphere was filled with groups of people unanimously spread out throughout the many rows of seats, anxiously awaiting for the show to begin.
Before the show started, the audience was delighted with an arranged medley of some classic music ranging from prominent genres such as rhythm & blues, rap, and hip hop.

The music slowly faded with the arrival of two of the show’s presenters. After giving a rundown of the show, the founder of LEAD and the fashion show, Tyauna Bailey, entered the room to much applause.

Bailey, who had been planning this show since last semester, briefly informed the audience about the labors of her hard work coming into fruition. “If there’s anything that I’ve learned about this process, it’s that nothing is final until the day of the program,” she said.

The program, approximately two hours long, was divided into three parts: Dipped in Culture, Vision & Mindset, and Nothing But Fruit.

When it came time for the models to do their thing on the runway, inclusion was their middle name. The show was generally receptive to gender, race, ethnicity, and size.

All of the designs in the show were designed by stylists in Baltimore, Maryland, Bailey’s hometown.

The end of the first part of the show was solely dedicated to the talent of the organization. Some of the models got a chance to recite either a short story or poem. The first story was entitled The Girl, performed by Sissi Elias.

The story serves as a triumph of her family legacy that began with her mother’s journey of migrating to the United States (Monroe, North Carolina) more than 20 years ago to start a new life.

At 19, Elias is a first-generation college student and licensed cosmetologist that embraces both her Spanish and American heritage. She uses her story as a motivation to keep moving forward day in and day out.

Taylor Sligh and Kristian Harper recited a poem entitled Black Girl Magic, originally written by Mahogany L. Browne. The magic of being black was, ironically enough, captured by them wearing black for the occasion.

The middle of the show featured performances by the university’s choir, Win-pipes, a display of True Struggle Apparel, a yard show by Wingate’s chapter of Omega Psi Phi, and the designs of 7digits2commas by Cardell Rawlings.

The final part of the show began with a special performance of the beloved Daniel Caesar and H.E.R. collaboration, Best Part, performed by Elijah Henderson and Safi Souare.

Modeling went into another brief intermission with a sensual dance performance from FMQ Dance, one of Wingate University’s new dance teams.

Following the performance was the sequence of the last two clothing brands, Salute Culture by Bernard and Syeko Designs.

There were also two raffles for students, in which one person was able to win a television and the other would be a recipient of any outfit of choice from any of the models.

In the show’s finale, a monitor was brung down and showed a video composed of clips dedicated to Bailey by some of her closest family members and friends in her hometown. While it was unfortunate that they couldn’t make the event, they wished her much congratulations.