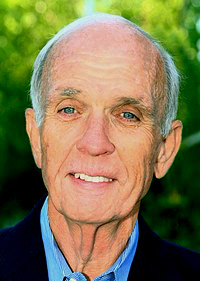 Wingate Town Commissioner John Mangum is on his way to a full recovery after having a heart transplant on May 20. The 70-year-old Mangum had been on the transplant list going on 11 months before he got the call that there was a heart available. He has been dealing with heart issues for several years beginning in 1984 when he had his first coronary bypass. At the age of 39 he had undergone six bypasses. John was doing well until two years ago when his health worsened.  His cardiologist forewarned him that this time would be very crucial for his health and exercise was necessary. During this time Mangum stayed in good shape, missing little to no days walking.  In June 2014, Mangum was placed on the transplant list and it wasn’t for 11 months later that a match was found. They were encouraged that it was a good, strong match.

Since the surgery, Mangum’s wife, Linda, has been taking care of him making sure that he recovers smoothly.  The two have been married for what Mangum calls “42 glorious years” and they have lived in Wingate all of their lives. John has been a Wingate Commissioner for going on 18 years and is currently in his fifth term. Aside from being a commissioner, Mangum is a long time member of Wingate Baptist Church, Lions Club, and the Wingate Fire Department. Mangum retired from Wingate University where he was the director of Cannon Athletic Complex. Mangum’s involvement has made him one of the most well-known people within the town of Wingate. He enjoys all that he does but the most rewarding for him is “being able to know all of the citizens and working with them.” When John’s health worsened his support system only strengthened.

Linda never left Mangum’s side throughout the process, missing only one day of visiting him in the 12 weeks that he spent in the hospital. Her one word to sum up how she felt during that time was “tired.” She was constantly going back and forth to care for and visit Mangum. But despite the hardships that the couple was put through, Linda says that she “never feared losing him” and stressed the idea that “there’s always something left to do.” She always had hope that he would get better and she would never give up on him.

When Mangum had gone through the grueling process and was allowed to, at last, return home to his beloved Wingate, he was met with more love than he could have ever imagined. On Sept. 15, there was a Wingate Town Commissioners meeting. The other commissioners had set out a name tag in his usual spot at the table, but no one knew if he was actually going to show up. But despite his recent return and recovering state, Mangum did make it. Linda said that “he surprised them by showing up” and that “once they all got done crying, they proceeded” with the meeting. When asked how his first meeting after being back from his heart transplant went, Mangum simply stated, “It was very good.” He joined in with his fellow commissioners to talk about a request from the Fire Department, chicken ordinances, and the Lions Club, which he had to give details about since he is a proud member himself.

Never the one to let anything get him down, Mangum says that he is doing “great” after the transplant. He has overcome his long-term problem of having a bad heart and says, “I’m in pretty good shape for the shape I’m in.” Linda agreed, adding “He is back to doing, truthfully, everything that he did before, except mow the yard” and that he has lost some of the strength and endurance that he once had.

The two of them ended with the message that they are “most thankful for the donor,” even though they do not know who it is, and begged that “everyone please think about becoming a registered donor.”