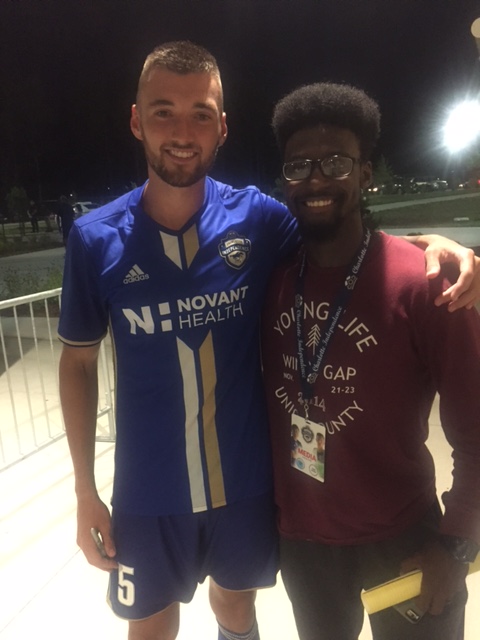 Wingate alumnus Callum Ross is playing very well this season for the Charlotte Independence of the United Soccer League.

The rookie midfielder was a member of the 2016 Division II men’s soccer national championship team for Wingate just a season ago. And he scored his first — and so far only — professional goal for the Independence while still a Wingate student, in a game on May 12 against Pittsburgh.

He told this story to The Weeekly Triangle after playing in a 0-0 draw against Richmond last Wednesday at the Matthews Sportsplex:

“So the day before, I had a 10-page paper due, and I was up till like two in the morning. I got up the next morning and managed to grab my first goal It was a bit of hard work and just a bit of trying to balance my time and get some sleep when I could. I loved scoring my first goal and I’m still looking for my second one.”

Now he has a new routine as a professional.

“For me it’s trying to get to bed before 11 or at least get off my feet and get some rest, then I’m up early-ish like 7-7:30 a.m. or so up on the training room kind of pre-gym stuff and warming up, you know?”  Ross said.

“Usually by 1 or 2 p.m. we’re finished, then we get our lunch. I go to the gym a lot maybe two or three times a week just to keep on top of things throughout the season. It’s  a busy schedule but if you manage yourtime correctly and put your mind to it and concentrate it’s not too much. You’ve just got to stay on top of it.”

Meanwhile, he has climbed his way up the depth chart and into the starting lineup, starting in 13 of the 14 games he has played in his rookie season.

“For me it was a case of kind of waiting for my chance to start,” Ross says.

His patience finally paid off following the suspension of a teammate, for undisclosed reasons. Callum assumed the starter role at midfielder and since then he hasn’t looked back.

“Every week I’m just trying to improve, trying to learn, listening to the coaches things like that and trying to take the opportunities when I get them,” Ross said. “I love starting, love playing and playing football. Also, I just need to try to keep improving and see how many minutes I can get by the end of the season.”

The tie last Wednesday extended the Independence’s unbeaten streak to nine games, and Charlotte is one point behind Charleston in second place in the USL Eastern Division. Ross hopes that for the second straight season, he might be playing for a championship.

“We’ve been struggling to pick up points, things like that, but we know inside this locker room that there’s plenty of talented players and we’ve got a style of play where other teams struggle,” he said.

“But we know what we want to do. We’re not satisfied with playoffs now, we’re up there now with the best teams and we want to go all the way and win the league, and then carry that through the playoffs.”