The Batte Center’s new Technical Director is a man of music and experience. Mr. Chandler Solomon comes from the University of North Carolina-Charlotte to take charge. “I chose Wingate because it offered me a way to develop my professional skills.” The Triangle was able to catch up with Mr. Solomon and ask a few questions. 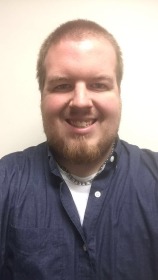 From a suburb in Atlanta, GA; his childhood was full of memories with his parents. “I have had many influences over the years; and my parents have been a large one,” said Solomon, “They taught me to always work hard and be a good person.”

Mr. Solomon’s parents have also played a role in his early academics as well. “I played a lot of sports as I grew up, even if I wasn’t always the best at them,” said Solomon, regarding his early school years. “I played baseball, soccer, and basketball when I was younger. Then played football and track & field when I got to middle school and high school. [My parents] were at every event that they could possibly be at; Educational or Sports related. [My parents] made sure that I achieved as much as I could ever wish to. I finished high school with a 4.3 GPA, a member of the National Honors Society, the National Technical Honors Society, the Beta Club, and had Varsity letters in Football and Track (throwing both shot-put and discus).”

One thing that really stuck Mr. Solomon’s imagination is the arts. “I got into the arts by making my own music. It was something that interested me from a younger age;” said Solomon. “I made (and still make to this day) hip-hop music.”

His music career all started with the help of a friend. “The move into music was pushed by a guy I knew from Canada; His name was Brennan Comis,” said Solomon. “He inspired me to get into music, from making my mixes to just learning how to become more creative.” Brennan, unfortunately committed suicide in February 2014.

His college career was also influenced by his interest in the arts. “I started my college career fresh out of high school by going to Appalachian State University in Boone, NC. I wanted to originally major in Advertising and then changed to Graphics Arts and Imaging Technology. I did not finish a degree there, however.  I moved back home [High Point, NC at that time] and started at Guilford Technical Community College. I originally started with the intentions of Network Operating Systems, but did not like that much either. So I changed up again because I really was enjoying the recording process for my own music,” said Solomon.

Before Wingate, Mr. Solomon was the Technology Support Technician in Halton Arena at the University of North Carolina-Charlotte. “I was very happy at UNC Charlotte previously. Working closely with the students and the environment that we had cultivated in my two years there,” said Solomon. Then the spot for technical director at Wingate University opened a few months later.

“I was not looking for a job just yet,” said Solomon, regarding the spot opening at Wingate. “But the position at Wingate dropped in my lap by chance. I was recommended the job by the theatre director at the place where my internship was back in 2014; He recommended me the job and recommended me to my current boss.”

When Mr. Solomon is not setting up performances or events that are going to take place in the Batte Center, which can include specific needs that are required for the event, or in meetings, He enjoys making music on the side, recording, and mixing for other artists that come to him with their needs.

He also enjoys some light gaming on his PC and Xbox One, staying current with developing trends in his field of work. “I have a passion to be the best TD that I can. Whether it’s long hours or some slower days. I always want to push myself and always want to learn.” But what he really enjoys, is spending time with his wife-to-be, Autumn. “She was a huge push for me to go after the job at Wingate,” said Solomon. “Thinking of our future together was one of the bigger pushes for me to accept this position.”

View all posts by wutriangle